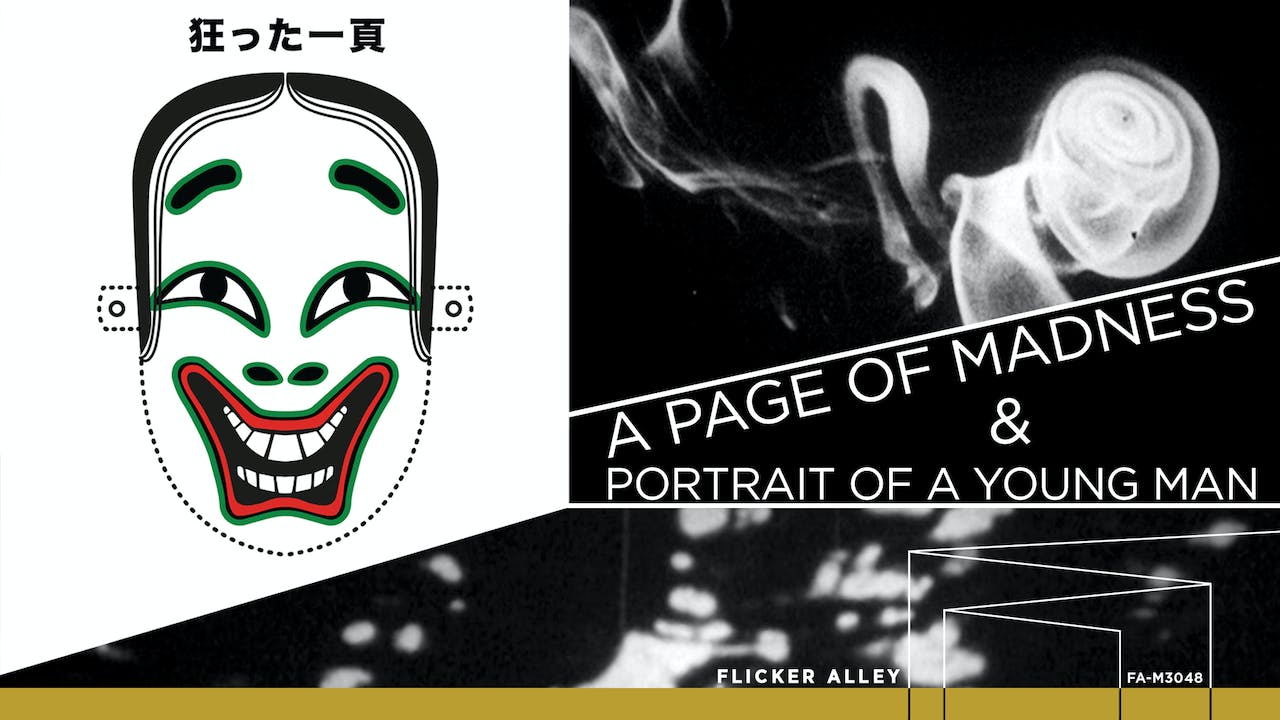 A Page of Madness & Portrait of a Young Man

Teinosuke Kinugasa's A PAGE OF MADNESS (Kurutta ichipeiji), produced in mid-1920s Japan, is widely considered to be one of the touchstones of early avant-garde cinema, and is also one of the most challenging and narratively complex films of the era. The fact that this important work has never before been released on home video may be in part due to the textual difficulty, though certainly the scarcity of source material was also a contributing factor.

Both an attempt at redefining narrative conventions and a harkening back to traditional, Japanese melodrama, the film can be seen as a negotiation of cinematic potentials at a time of historic change and theoretical division in the art form. Based on a treatment written by 1968 Nobel Prize winning novelist Yasunari Kawabata, the story, as laid out in the script, is simple. A retired sailor (Masao Inoue) becomes a custodian at a mental hospital to be closer to his estranged wife (Yoshie Nakagawa), one of the patients at the facility. Their daughter (Ayako Iijima) is soon to be married, but the father’s fear and pain surrounding his wife’s mental state—along with the reasons for her captivity—threaten the future happiness of the family. Teinosuke utilizes flashbacks, rhythmic intercutting, and impressionistic symbolism, all without intertitles, to supersede naturalistic representation by visually inhabiting the emotional lives of the characters.

This edition of A PAGE OF MADNESS is scanned from a 16mm print and the image quality is therefore correlative to the source material. These minor limitations, however, are more than made up for by the visceral power of the film, along with a brand-new score by the incomparable Alloy Orchestra.

PORTRAIT OF A YOUNG MAN was filmed sporadically over the span of six years (1925-1931) in Bermuda, New Mexico, Arizona, Colorado, and British Columbia. The director, producer, and photographer was Henwar Rodakiewicz, then only in his mid-twenties. He had no real concept for how the overall film would turn out—as there were very few precedents in existence at the time—and relied only upon his personal intuition and keen eye for cinematic nuance.

The film is broken up into three movements, a structural analogy to a musical symphony, but also suggestive of the overall visual content: movement and how to capture it. In the service of this study, and within each movement, Rodakiewicz employs various techniques, including slow motion (the twisting spirals of smoke shot at 64 FPS), geometry (water flowing in contrasting directions in contiguous shots), repetition, exposure (shadows are deep and dark), abstraction, and rhythm. As with A Page of Madness (1926), the work pushes a step beyond naturalism, guiding the viewer into a place of pure expression. The end result is, as the title suggests, a meditative study of Rodakiewicz in his youth. To quote the great director Fred Zinnemann, “Rodakiewicz was trying to express himself through these inanimate objects of nature; he was actually showing himself. It was a remarkable but personal piece of filmmaking.”