Skip to main content
Flicker Alley was born out of a passion for cinematic history and a desire to bring filmmakers and films from out of the past to new audiences and renewed recognition. The company was founded in 2002 by Jeffery Masino who drew on a lifelong enthusiasm and fascination with silent film as well as classic, experimental and independent cinema. A goal of Flicker Alley is to contribute to the on-going interest in our film heritage through the creation of new, high-quality digital editions for broadcast, steaming and home video distribution. The Flicker Alley brand has grown to enjoy national and international critical acclaim and is regularly featured in annual “Best Of” lists. The company is a three-time National Society of Film Critics Film Heritage Award recipient for publishing “rare early U.S. and foreign silent film” (2009, 2010, and 2011). The name “Flicker Alley” was the nickname of Cecil Court, London W.C.2., the business center of the British film industry during the silent film era.
Trailer 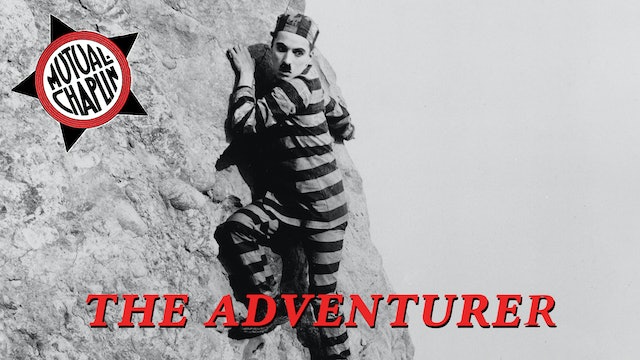 The most popular of the Mutuals, THE ADVENTURER begins and ends with a chase. It is the fastest-paced film of the series, and although it has more slapstick than Easy Street (1917) and The Immigrant (1917), it is redeemed by its construction, characterization, and Chaplin's balletic grace.

Highlights from the film include Charlie donning a lampshade and freezing in position as the guards run past him and a chase in which he dodges a prison guard and the rival by using sliding double doors which become, in turn, a head-stock, a moveable wall, and an escape route. It is ironic that in his last film of the demanding Mutual series Charlie escapes from prison. In contrast with Essanay, Chaplin’s relationship with the Mutual Film Corporation ended amicably. Indeed, Mutual offered him a million dollars for eight more films, but Chaplin sought even greater independence. Chaplin later wrote, “Fulfilling the Mutual contract, I suppose, was the happiest period of my career. I was light and unencumbered, twenty-seven years old, with fabulous prospects and a friendly, glamorous world before me.”

Right-click this and copy the link address.

Watch on your Television

Watch on your Computer