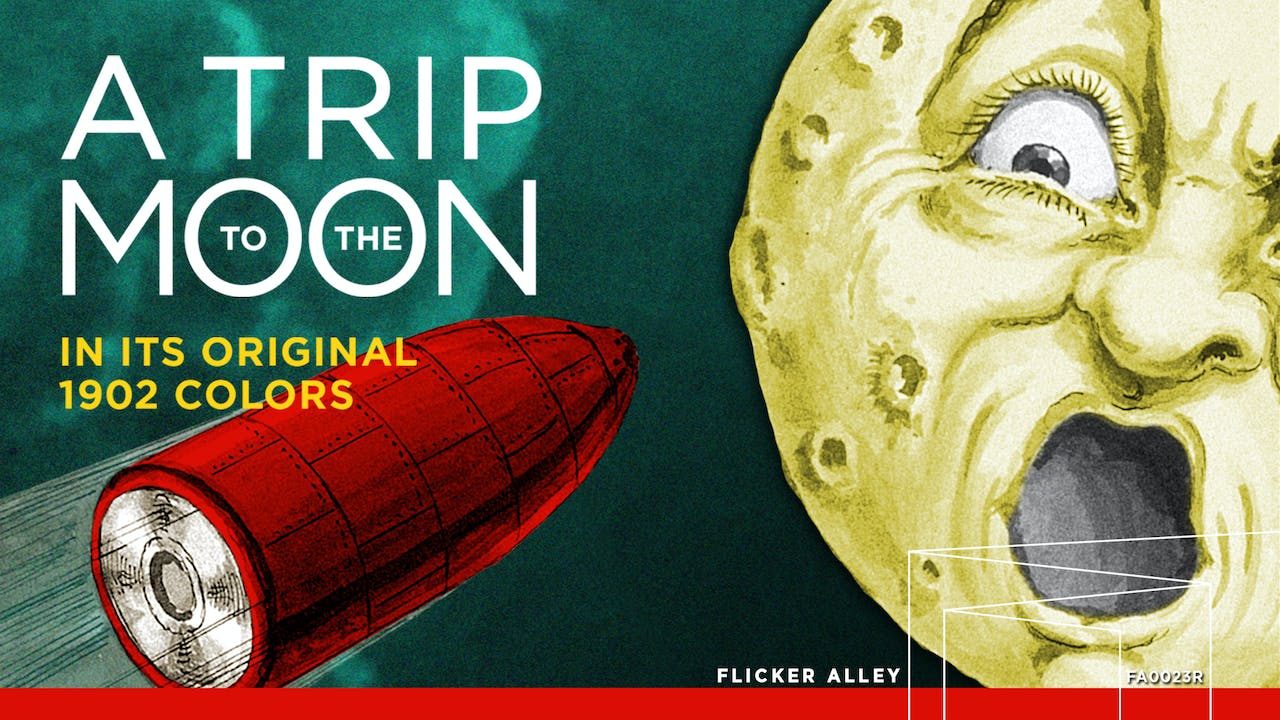 Once believed lost, a copy of the original, hand-colored version of Georges Méliès’ masterwork A TRIP TO THE MOON was miraculously found in Barcelona, Spain in 1993. Initially thought too fragile to restore, the film underwent one of the most complex and ambitious film restoration projects ever. Three experts in film restoration – Lobster Films, Groupama Gan Foundation, and Technicolor Foundation for Cinema Heritage – used the most advanced digital technologies available to assemble and painstakingly restore the film’s 13,375 fragmented frames.

Follow six scholars—members of the Astronomers’ Club—as they set off on an expedition to the moon! Traveling in a bullet-shaped rocket fired into space by a giant cannon, these voyagers arrive to meet the moon’s inhabitants: the Selenites. Escaping the Selenties’ king, the scholars fall back to Earth in their rocket and are fished out of the ocean by a sailor. Applause and a triumphant parade for the six heroes concludes the first outer-space adventure in the history of cinema.

Flicker Alley, Lobster Films, and Blackhawk Films® are thrilled to present the 1902 hand-colored edition of A TRIP TO THE MOON, featuring a brand new score by Jeff Mills and an improvised piano track by Serge Bromberg with narration written by Georges Méliès.

THE EXTRAORDINARY VOYAGE: Directors Serge Bromberg and Eric Lange (Lobster Films) chronicle the journey of A Trip to the Moon from production in 1902, to the astonishing rediscovery in 1993, to the eventual restoration and opening at the Cannes Film Festival in 2011. The 65-minute documentary includes interviews with filmmakers Costa Gavras, Michel Gondry, Michel Hazanavicius, and Jean-Pierre Jeunet on Méliès enduring significance to cinema.

A TRIP TO THE MOON (B&W): A beautifully restored black-and-white edition from original 35mm elements with two separate audio tracks of music: An orchestral score by composer Robert Israel and a second track produced by Russell Merritt consisting of a troupe of actors voicing the various characters as performed in the U.S. in 1903, with piano accompaniment by Frederick Hodges.